Political DataViz: Jeez, will the U.S. Midterm Elections Just Be Over!

Disclaimer: I am a registered Independent voter. I tend to vote for those candidates who I think will best serve their constituents and our great country. The rest of it is just noise.

I try not to stray into the realm of U.S. politics in my dataviz blogging. Having done so in the past has results in some surly blog comments and death threats (yes, death threats for posting data visualizations related to politics). But, sometimes, you need to say something, anything, when the whole country is going mad. Between political leaders in our country having pathological behavior, politicians out and out lying, voter suppression, politicians spreading fear, unknown, and doubt or FUD (we use to say IBM spread FUD in my early days in IT to make us weary of buying from any of their competitors), I have to say I just want these midterms to be over.

People are really stressed out over this election; to the point where many people like myself feel we, as a country, are almost at the point of no return. Will our elected officials every be able to be bi-partisan again? Will principles and integrity ever return? Will common decency in our discussions about our country be a complete thing of the past?

A recent NBC/WSJ Poll had some interesting bar charts. There is a little something for everyone in these charts. If you are curious how your political party feels about the upcoming midterms, your demographic group, socioeconomic group, etc., you should be able to find it in the charts below.

These charts helped me better understand where our two major political parties differ on some key issues and where the people in each of these parties would tend to vote based on gender, ethnicity, education, age, etc.

I will leave you with my only strong comment. VOTE! I don’t care who you vote for, just vote. Otherwise, just shut up. You are part of the problem if you do not vote.

15 more days until the end of this madness. 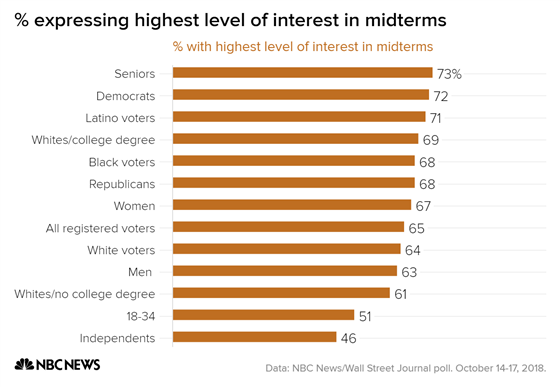