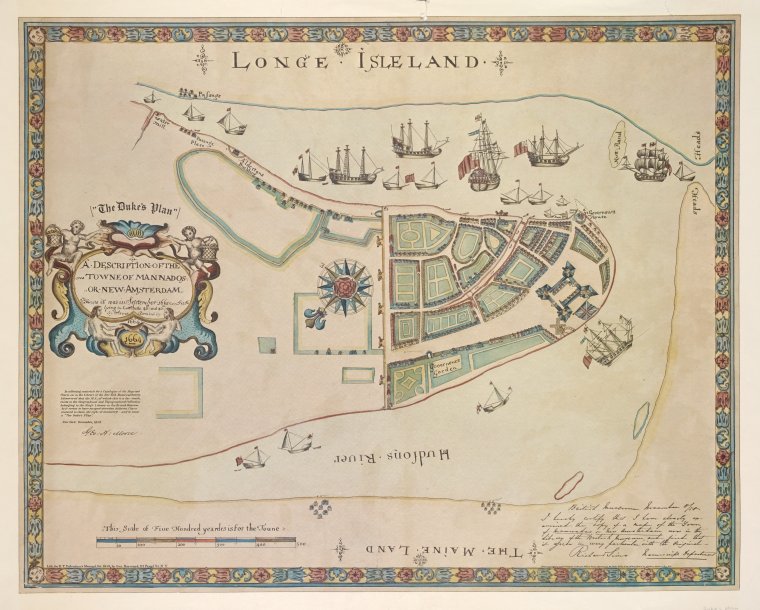 Since their inception, maps have been embellished with illustrations. Through July 16, a selection of illustrated maps of New York spanning six centuries is on view at the New York Public Library. A preview of the exhibition—along with captions written by its curator Katharine Harmon—is presented below.

The famed Castello Plan offers a rare view of New Amsterdam—located at the southern tip of what is now known as Manhattan—during the forty year period of Dutch rule. Surveyor General Jacques Cortelyou made a map of the Dutch settlement in 1660, which was subsequently lost, but an unknown artist happily made another copy. This is the earliest map of the city existing today. It was sold to Cosimo de’ Medici, Grand Duke of Tuscany, around 1667, and “rediscovered” 233 years later at the Villa di Castello near Florence. The American illustrator James Wolcott Adams redrafted the map in 1916; this hand-drawn copy of the original Castello Plan is housed in the library’s print collection.

In 1664, the British captured New Amsterdam by order of James Duke of York. An unknown draftsman prepared a revised version of Cortelyou’s plan for the Duke, with the addition of the triumphant British men-of-war. Gone are the smallholdings and kitchen gardens of the Costello Plan; still visible are the wall at the northern end of the settlement, now Wall Street; the fort or battery; and the canal curving inward through the center of town.

John Tallis, a renowned nineteenth-century British map publisher, produced the lavish illustrated atlas of the world for the 1851 Great Exhibition in London. The atlas is considered a decorative masterpiece. Tallis worked with the highly skilled engravers John Rapkin and Henry Winkles to create the atlas and other cartography that was both accurate and elegant. Their collaborations included the detailed city plans such as this view of lower Manhattan from Forty-Second Street South to the Battery, with Governors Island and parts of Jersey City, Hoboken, Williamsburg, and Brooklyn. Illustrated inset views depict a steamer, Brooklyn, City Hall, the customs house, the Narrows from Fort Hamilton, and Manhattan as seen from Williamsburg.

The Bronx and points north are a pristine watery world in the map of the Bronx River Parkway, the first “open landscaped highway” in the nation, and the linear “reservation” surrounding it. Established in 1925, the reservation is Westchester’s oldest park; it extends twelve miles from the New York City line north to the Kensico Dam Plaza in Valhalla. It was originally designed in the late nineteenth century as a means of cleaning up the Bronx River, which had become an open sewer, dumping ground, and mosquito nursery. The parkway and its park, eighteen years in the making, were an immediate success; by the summer of 1927, as many as thirty-five thousand motorcars toured there on sunny weekends.

In 1946, according to this map, Harvey, Oklahoma!, and Life with Father were established hits on Broadway. Rockettes tower over the ice skaters at Rockefeller Center; and at the Met, Brunnhilde holds forth at decibel levels loud enough to disturb the peace here at the New York Public Library. Up north, a Yankee pitcher faces off against a Giants batter. On the map’s inset, apparently a list of places to take a date, a map enthusiast helpfully highlighted a choice destination. Paul Savitt worked as a successful New York advertiser for twenty-five years before deciding, at the age of forty-six, to become a full-time fine artist. His childhood heroes were Paul Gauguin and Vincent van Gogh.

Here is a map of a “modern metropolis in the making, pictorially presented for the man who learns by looking.” The man who created this map was an illustrator, decorator, theatrical designer, and painter. Millard is best known for his Art Deco poster designs. This view of New York is packed with historical trivia and whimsical figures, while scenic insets enhance the pictorial experience.

One thought on “DataViz as Maps: Illustrated Maps of New York Through the Ages”