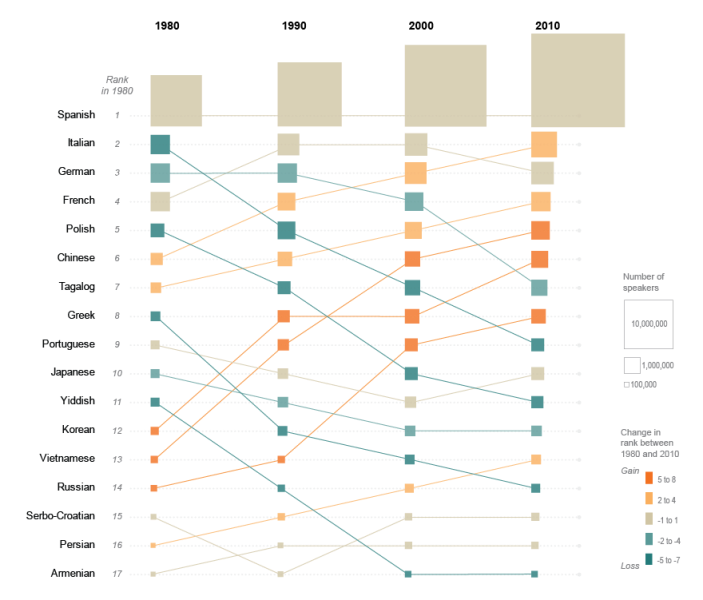 Before I discuss this graph, I wanted to point out that one of my co-workers sent this to me. I send a lot of data visualization examples around the company to expose our business partners to different ways data can be seen. This is important because too often during a requirements session, someone will ask the business partner if they need a dashboard. This is problematic on two fronts: first, many are not sure what a dashboard is and how it will benefit them, and second, even if they know what a dashboard is, they are not sure what makes up a dashboard (e.g., graphs, selectors, etc.) It’s a case of “How do you know what you don’t know.”

My mantra is that I want to get my business partners excited about their data (sorry, Dr. Phil for stealing your tagline). The fact that after a year of me providing data visualization training, dashboard design best practcies, etc., the business is now getting excited to the point where they are sending me cool visuals that they find. I am exicted by the fact that they are doing this and take a little pride that we have built this collaborative, sharing relationship.

Now on to this graph (Thanks Rich!).

In 1980, the five most commonly spoken languages other than English were Spanish, Italian, German, French, and Polish. By 2010, Spanish was still the most widely spoken language after English but it was followed by Chinese, French, Tagalog, and Vietnamese. [SOURCE]

NOTE:  Square area is proportional to the number of people speaking a given language. Data are for the population 5 and older.

Spanish includes Spanish Creole, French includes Patois, Cajun, and French Creole; Portuguese includes Portuguese Creole. The languages highlighted are the languages where comparable data were available for the four time periods: 1980, 1990, 2000, and 2010. Other languages spoken in 2010 at least as widely as those shown above include Arabic, Cambodian, Gujarati, Hebrew, Hindi, Hmong, Navajo, Thai, and Urdu.

As is the case with all surveys (including the 1980, 1990, and Census 2000 “long-form”), statistics from sample surveys are subject to sampling and nonsampling error.

This is definitely a very interesting and engaging combo chart. Stephen Few and Alberto Cairo caution against using circles since a reader will tend to want to compare the diameters of multiple circles versus the correct way of wanting to compare the areas of the circles. I am curious what they would think of these squares and the legend provided to interpret the squares. I will revisit this circle topic in a future blog.