I am continuing my week-long review of the shortlist entries for the Kantar Information is Beautiful Awards 2017.

Below is more detail on this entry. I also adding some context about the concept of what a Triple Play is after the dataviz screenshots.

A visualization of all 711 Triple Plays in MLB history, looking at the frequency of Triple Plays by position and sequence order. 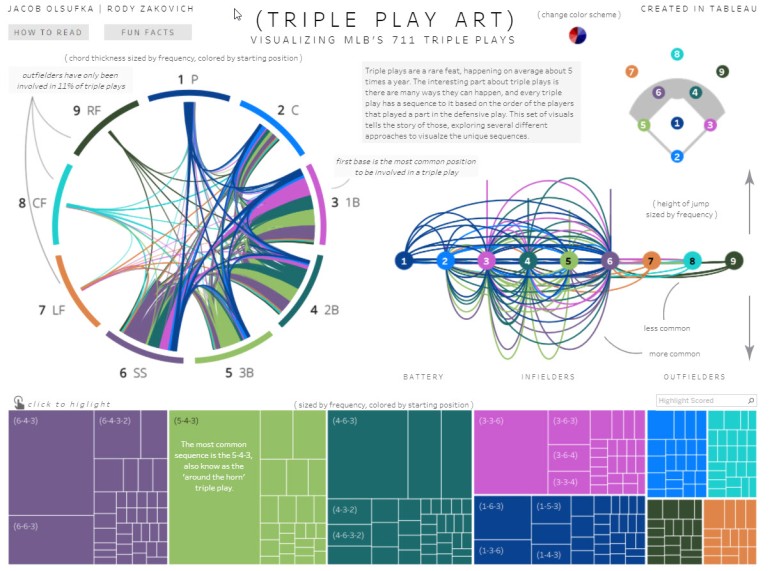 Adding Context to the Concept of the Triple Play

To help those not familiar with baseball or the concept of a triple play, here is a brief discussion about what constitutes a triple play.

In baseball, a triple play (denoted as TP in baseball statistics) is the rare act of making three outs during the same continuous play.

Triple plays happen infrequently – there have been 716 triple plays in Major League Baseball (MLB) since 1876, an average of approximately five per season – because they depend on a combination of two elements, which are themselves uncommon:

First, there must be at least two baserunners, and no outs. From analysis of all MLB games 2011–2013, only 1.51% of at bats occur in such a scenario. By comparison, 27.06% of at bats occur with at least one baserunner and less than two outs, the scenario where a double play is possible.

Second, activity must occur during the play that enables the defense to make three outs. Common events – such as the batter striking out, or hitting a fly ball – do not normally provide opportunity for a triple play. A ball hit sharply and directly to an infielder, who then takes very quick action – or unusual action, confusion, or mistakes by the baserunners – is usually needed.

Examples of the Triple Play

The most likely scenario for a triple play is no outs with runners on first base and second base, which has been the case for the majority of MLB triple plays. In that context, two example triple plays are:

During the 1973 season, Baltimore Orioles third baseman Brooks Robinson started two such 5-4-3 triple plays; one on July 7 against the Oakland Athletics, and one on September 20 against the Detroit Tigers.

On July 17, 1990, the Minnesota Twins became the first (and to date, the only) team in MLB history to turn two triple plays in the same game. Both were 5-4-3 triple plays, executed by fielders Gary Gaetti, Al Newman, and Kent Hrbek in a game against the Boston Red Sox.

Brooks Robinson is the all-time MLB leader for grounding into triple plays, with four in his career.

The most recent triple play in MLB was turned by the Detroit Tigers on September 8, 2017, against the Toronto Blue Jays in the bottom of the sixth inning. With runners on first and second, Kevin Pillar hit a sharp grounder that was fielded by Jeimer Candelario, who stepped on third (one out). Candelario threw the ball to second baseman Ian Kinsler (two outs), who then threw to first baseman Efren Navarro (three outs), completing the 5-4-3 triple play.