Dataviz: The Complete Star Wars: A New Hope Movie in a 403.54 Feet Infographic

SWANH.NET is an adaptation of Star Wars Episode IV in a style that was inspired by infographics. One story in one piece of 123 meters length (403.54 feet)

It was created by Martin Panchaud. He is an illustrator and graphic novelist, born in 1982 in Geneva, Switzerland and currently living and working in Zurich. He makes graphic documentaries and tell his own stories in this particular visual style that he specializes in.

This long ribbon reminds one of the ancient Chinese script rolls that had to be rolled in and rolled out simultaneously in order to be read. Martin likes this stretch between ages, cultures, and technologies.

However, the Internet likes short stories and summaries, quickly understandable contents. With his work, Martin aims to create a contrast to that.

Martin thanks the Star Wars Universe community for their good advice, the encouragements and their keen eye which was of great help  realizing this project and to keep it as closely to the original as possible.

The Star Wars series has had a heavy impact on pop culture and they continue to influence trough generations. It is a modern form of mythology and the IV episode is where it all began.

Star Wars continually inspires and touches its audience through generations. It has become alive and evolves with the zeitgeist.

Click on the image below to see Martin’s masterpiece. 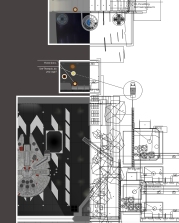