Traffic to healthcare.gov, the federal health insurance exchange, has dropped off significantly since consumers began encountering problems with the site after it launched on Oct. 1.  The Chicago Tribune Graphics Department created this data visualization to show the effects of the slowdown through Wednesday, October 23rd, 2013. 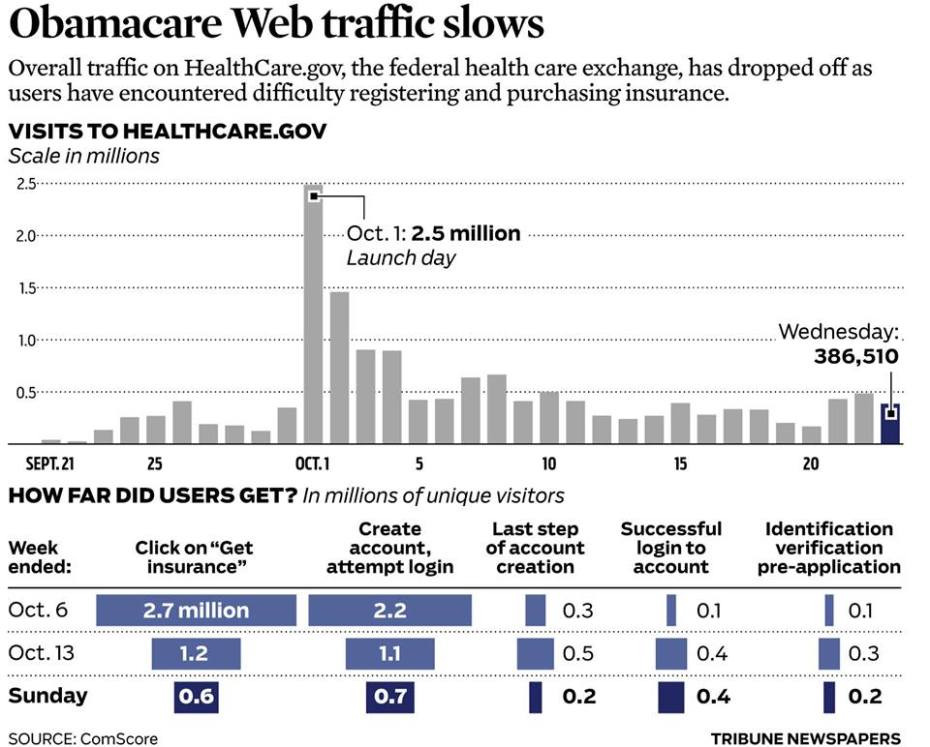 Developers of the troubled Obamacare website confirmed Thursday, October 24, 2013 that a last-minute decision requiring users to sign up before shopping for insurance caused the system to bottleneck and acknowledged they did not conduct an “end to end” test until just before this month’s botched rollout.

The federal contractors sought to shift responsibility for the more than $400-million project to the Obama administration, providing fuel for Republicans who want to kill the Affordable Care Act. The White House‘s Democratic allies have expressed growing anxiety over what went wrong with President Obama’s signature achievement — and when it will be fixed.

After withholding basic information about the program’s progress so far, the administration announced Thursday that 700,000 applications had been completed for insurance coverage. The administration conceded that testing was not done earlier because of the tight deadline to launch healthcare.gov by Oct. 1.

“This system just wasn’t tested enough, especially for high volumes,” said Julie Bataille, a spokeswoman for the Centers for Medicare & Medicaid Services, during a call with reporters. The government agency administered the project for the Department of Health and Human Services.

On Capitol Hill, Republican leaders have made no secret that the House hearing rooms would become the next venue for the battle over Obamacare, and the grueling session before the House Energy and Commerce Committee opened a new front in that campaign as officials were hauled before the panel.

“Why did they assure us the website would work? Did they not know?” said Chairman Fred Upton (R-Mich.), noting that Heath and Human Services Secretary Kathleen Sebelius is scheduled to testify soon. “That’s what we are looking to find out, with the contractors today and with Secretary Sebelius next week.”

Some of the most prominent Democratic supporters of the healthcare law have grown increasingly exasperated over the website’s performance. The site was supposed to be an easy way for uninsured Americans to buy affordable health insurance, but users have had trouble signing on, getting accurate cost estimates and completing enrollment.

“How soon will it take to repair these glitches?” asked Rep. Eliot Engel (D-N.Y.)

“I have a team of people working around the clock trying to get this quickly resolved,” said Cheryl Campbell, senior vice president at CGI Federal Inc., the lead federal contractor.

Campbell acknowledged that the end-to-end test was not done until the last two weeks before the website’s debut. But the contractor suggested in written testimony that was the responsibility of the Centers for Medicare & Medicaid Services, which “serves the important role of systems integrator or ‘quarterback’ on this project and is the ultimate responsible party for the end-to-end performance.”

Many of the problems appeared to stem from a last-minute change to the site’s operation that required visitors to sign up rather than simply browse through the various health insurance policies.

The extra step created a bottleneck, according to Andrew Slavitt, group executive vice president at Optum, a business unit of giant United Health Group, whose Quality Software Services Inc. handled that aspect of the system as a subcontractor.

“We don’t know why the decision was made,” Slavitt said. He testified that the change came within 10 days of the rollout, and that his group suggested at the time that more testing would be needed.

A top House Republican, Rep. Darrell Issa (R-Vista), chairman of the House Oversight and Government Reform Committee, has suggested that the late switch was initiated by the White House to prevent Americans from experiencing “sticker shock” over the costs of the insurance policies.

Bataille, the administration spokeswoman, said the intent was to focus resources on the online application and other aspects of the site.

“We made a business decision to prioritize resources,” she said.

The White House is scrambling to prevent further fallout from the healthcare law, especially a suggestion from some lawmakers to postpone the law’s requirement that all Americans carry insurance in 2014, or face a fine, unless the website is improved.

This week, the administration clarified that the deadline for signing up is March 31, the end of open enrollment. Democratic Sen. Kay Hagan, who is up for reelection next year in North Carolina, suggested Thursday the enrollment period should be extended. Under the law, people who go without insurance for three consecutive months can face the tax penalty.

In the hearing room, the soaring rhetoric was a reminder that the heated debate over Obamacare is far from over.

Rep. Joe Barton (R-Texas) suggested visitors to the website could not be guaranteed their personal privacy, prompting Rep. Frank Pallone Jr. (D-N.J.) to declare the hearing a “monkey court.”

Republicans formed an unusual alliance with Democrats on the committee who expressed disbelief that the website’s high traffic volumes were to blame for its shortcomings.

Rep. Joe Pitts (R-Pa.) called the website’s debut “one of the biggest IT disasters in government history.”