The History of the 1953 Disneyland Presentation Map

The world’s first, and most famous, Disneyland Map is coming up for auction soon.

Van Eaton Galleries will be auctioning off this map as well as nearly 1,000 Disneyland artifacts from 1953 to the present day. Some of these artifacts include original props, wardrobe, ride vehicles, and souvenirs.

Of special interest in this auction is Walt Disney’s first-ever map of Disneyland. This original map, created in 1953, was used by Walt and Roy Disney to secure the financing they needed in order to build the park.

Shown in the image above, the original hand-inked and hand-colored presentation map of Disneyland, was created between September 26th and 27th of 1953 by Walt Disney and his artist Herb Ryman.

Walt and Ryman worked at the Disney Studio over that weekend in order to complete this map in time for Walt’s brother, Roy Disney, to take the map to New York. Roy used this map as his main presentation piece in order to get the financing needed to build Disneyland. [1]

The presentation proved successful with ABC, and Disneyland was able to become a reality.

The image above is a publicity photo of the same original map from October of 1953, shortly after returning from New York with Roy. The push-pin holes along the border and various spots of wear can easily be matched up between the photo and the physical map.

As of October 1953, the map has been colored and is noticeably darker in certain areas including “Sleeping Beauty Castle” and some of the buildings of Main Street. Approximately a year from when this photo was taken, this same map would receive new inked lines, enhancements, and additional color.

In the image above, Walt Disney and his development team for Disneyland review the map during the early stages of designing the park in 1954. Notice on the wall behind them is the original map that was taken to New York. This same map that was taken to New York in 1953 was later displayed and used in the development of the park in 1954 as well. Later on, Walt would have this same map enhanced with additional black lines and color. But, as it hangs in this photo, it more closely resembles how it looked when it went to New York. 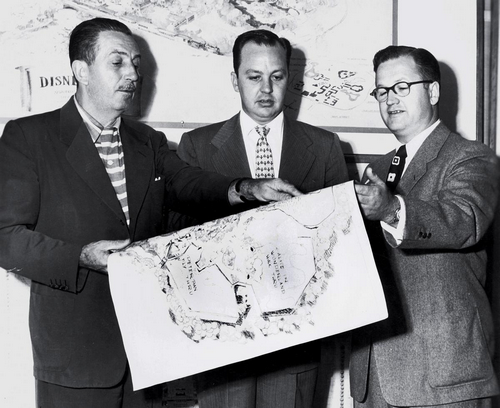 Here is another image of the map on its presentation board behind Walt. The man in the center is Disneyland’s first Manager, C.V. Wood. This map wasn’t only used in New York. When it returned to the studio in October of 1953, it was presented at meetings with developers, potential investors, and his design team during the construction of the park through 1954, and even into 1955.

This image of Walt with the same map is from an article in This Week Magazine from September 19, 1954. The article shared some of the first information about Walt’s park, and “for the first time, too, a map of Disneyland is here released to the general public”.
The map they write about in the article is the same exact map that was taken to New York almost exactly one year earlier.

The map has now been re-inked in this image, and additional color has been added.
For the sake of the magazine’s printing, an overlay layer with the arrows and some smaller details has been added so that the text on the map could be read when printed in the magazine. If you look closely, you can just make out the fold-lines in the map from the presentation board. 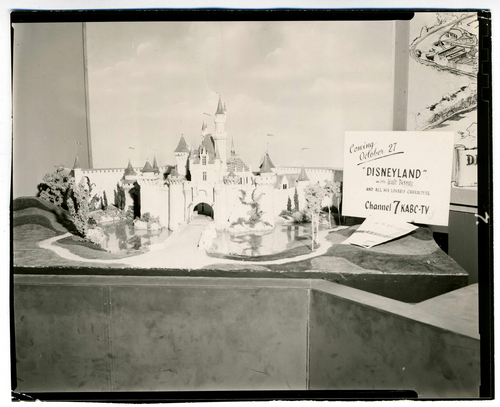 At the Los Angeles Fair between September 17th and October 3rd of 1954, the map was presented behind a model of “Sleeping Beauty Castle”. This display helped promote the upcoming “Disneyland” television show on ABC which debuted on October 27, 1954.
For many, this map display at the fair was the first image of Walt’s park that they ever saw.

In March of 1955, Walt Disney gave this original map to his employee and friend, Grenade Curran. Walt had known Grenade’s family, and had developed a playful relationship with him due to his unique first name. Grenade was present at the Opening Day of Disneyland and helped drive special guests around the park in original “Autopia” vehicles.

The map has remained out of public view for over 60 years.

Now, with the upcoming Van Eaton auction, the history of this map is brought back to the public as part of “Walt Disney’s Disneyland”, an exhibition and auction of approximately 1,000 Disneyland artifacts.

Van Eaton Galleries is located at: