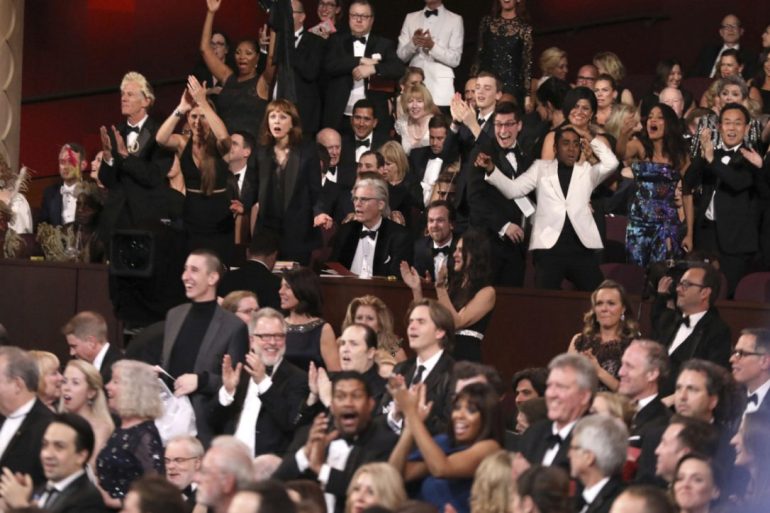 Like many of your, I watched the 89th Academy Awards Ceremony (commonly referred to as the Oscars) last Sunday night. And like many of you, I had my WTF moment when it was determined that Moonlight was actually the winner of Best Picture versus the front runner, La La Land. As you can see in the photos above, even great actors cannot hide their surprise of what happened.

Redditor ShinyTile makes the argument that poor graphic design may have been a key contributor to the snafu.

Nolan Haims, Principal of NolanHaimsCreative, decided to see if he could provide a better way to design the Oscar winner card.

First, let’s look at the actual winner card for Moonlight. ShinyTile points out that the Oscars logo, at the top of the card and centered, catches the eye first, and in this context is entirely irrelevant to the purpose and usage of the card. Nolan felt that most winners would keep the cards as nice keepsakes (in addition to the statues), and he was okay with keeping the logo, but minimizing it and making it the last thing the eye might read. In its place at the top center,  Nolan would have instead placed the category in the same Oscar logo gold. This is where the presenter’s eyes goes first and it also serves to confirm which category winner is being announced. Then, immediately after the category name is processed by the presenter, the next piece of information they would view would be the winner name—big, bold and in all caps.

Mr. Haims was okay with the title being all caps, but he would make the additional information (in this case the producer names), sentence cap as he felt this is easier for the eye to read, especially with longer and more complicated names. The only words that the presenter would read out loud are in black and the other two items are in the less prominent gold.

Here is an example of the redesigned Oscar winner card Mr. Haims created.

Also, the LA Times points out that the mix-up could also partially be due to poor envelope design.

I would like to hear your thoughts about Mr. Haims design and any additional suggestions you might have for an alternative Oscar winner card design.