This was an interesting, creative story and data visualization that appeared in last Wednesday’s New York Times. It was written and created by Tim Wallace of The New York Times.

Mr. Wallace is a designer, mapmaker, obsessor of old things, gummi bear enthusiast. He is currently the Graphics Editor at The New York Times with a PhD in Geography from The University of Wisconsin-Madison (he graduated last May!). Tim study cartographic design & interaction in News Media.

u’d like, you can check out his tweets. He is also an unabashed Bostonographer… and, yes, the ‘home’ icon on his NYT’s body of work page is based on his favorite home ever.

Personally, I am still trying to get my arms around the results of the election. I think in my lifetime of voting (over 40 years), I have never seen an election that the pundits got so wrong. Also, I don’t think I have ever seen our nation so divided like it is.

Good thoughts to all of you struggling with this as well.

I want to wish all of my readers a Happy Thanksgiving. I am very reflective this year and thankful for all I have.

For many people, myself included, it feels that the recently Presidential election tore the country in two. In Mr. Wallace’s data visualization, he took the results of the election from November 8, 2016 and created two imaginary nations by slicing the country along the distinctive divide between Republican and Democratic Americas. 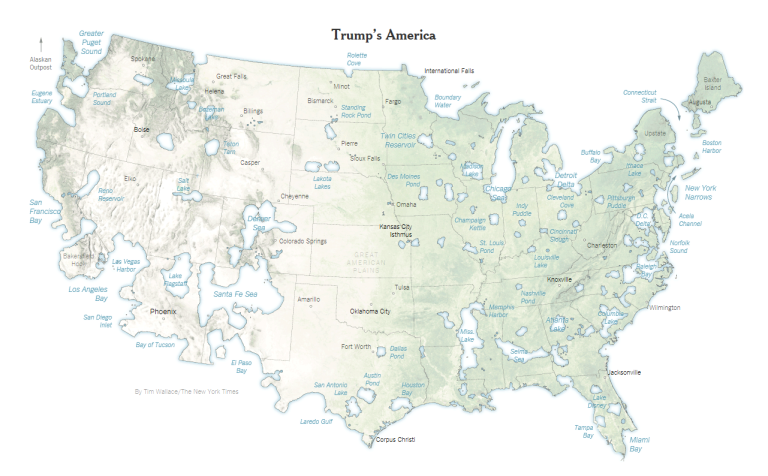 Geographically, Donald J. Trump won most of the land area of the United States. His imaginary country would consist of areas he won and he would retain more than 80 percent of the nation’s counties.

While Trump country is vast, its edges have been eroded by coastal Democrats, and it is riddled with large inland lakes of Clinton voters who were generally concentrated in dense urban areas.

Hillary Clinton overwhelmingly won the cities, like Los Angeles, Chicago and New York City, but Mr. Trump won many of the suburbs, isolating the cities in a sea of Republican voters.

Mrs. Clinton’s island nation has large atolls and small island chains with liberal cores, like college towns, Native American reservations and areas with black and Hispanic majorities. While the land area is small, the residents here voted for Mrs. Clinton in large enough numbers to make her the winner of the overall popular vote.