On January 20th of this year, methodologies expert Ed Yourdon passed away at the age of 71. Mr. Yourdon played a significant role on my early career of using methodologies as well as CASE tools.

I had an opportunity to meet Mr. Yourdon in the early 1980s at a CASE tools exhibition. He was a real down to Earth guy and personally started a casual conversation with my wife and I about a recent trip coming up for him.

Probably, one of the most inspiring articles I read in my career was Ed’s article on the Silent Revolution. In it, Ed talks about the best way to get people to following methodologies, diagramming and documenting coding processes was to just do it and set an example. People would then become curious on what you did, and ask how to do it. You teach that person and then so on. You basically converted your co-workers to using the methodologies one by one using a silent revolution.

For all of you folks that drew data flow diagrams by hand using an IBM flowcharting template and kept data dictionaries on index cards, here is an excerpt from an article by Patrick Thibodeau from Computerworld celebrating the great work of Ed Yourdon. 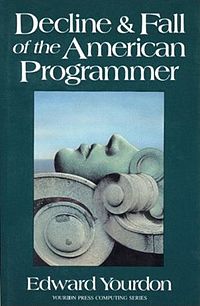 There’s a good chance you have read something by Edward Yourdon, especially if you were interested in emerging IT problems and trends.

Yourdon, who died Jan. 20 of complications from a blood infection, was a computer consultant and an expert on software engineering principles. He was noted, in particular, for his work on structured programming methodologies and authored or co-authored more than two dozen books, hundreds of technical articles and many columns for Computerworld.

Yourdon’s interests and impacts were wide-ranging. Notably, at a time when few even thought about offshore outsourcing and the movement of programming jobs overseas, Yourdon’s 1993 book, The Decline and Fall of the American Programmer, offered an early warning about how such a job shift might happen.

The potential for Y2K problems was also an area Yourdon was quick to warn about. The two-digit year formats meant that many systems would not distinguish between 1900 or 2000 when 1999 ended.

The problem is sometimes scoffed at today. It did not cause TEOTWAWKI (The End Of The World As We Know It), and later prompted some to argue that issue was oversold. But often overlooked in post-Y2K assessments is an appreciation of the massive amounts of money and time firms and governments spent remediating code beforehand.

Yourdon, in his writings, contributed to the Y2K repair effort by advising people to, first, take it seriously, and then by outlining the things they could do to fix it.

A few weeks into the year 2000, Yourdon noted: “Before we congratulate ourselves too enthusiastically for our Y2K success, we should admit that in many cases, we failed from a budgetary perspective, and that’s it’s too early to tell whether we failed in terms of bugs. Many large organizations spent two to three times their original estimates; the U.S. government, for example, estimated in 1997 that it would spend roughly $2 billion on Y2K repairs, but that gradually rose to approximately $8 billion by last fall. That’s a polite way of saying that it exceeded its original budget by a factor of four.”

Yourdon, an MIT graduate, was co-founder of the Cutter Consortium, an IT advisory firm in Arlington, Mass.

Yourdon’s passing prompted an outpouring of tributes and memories, many of which appear online at Cutter.

Karen Coburn, the president and CEO of Cutter, wrote, in part: “What we all remember most is Ed’s kind and generous nature, his wit and humor, his perfect prose, and his great wisdom — about life and everything IT.”