30 Years Ago: I Ate the 72 oz Steak at The Big Texan in Amarillo, Texas 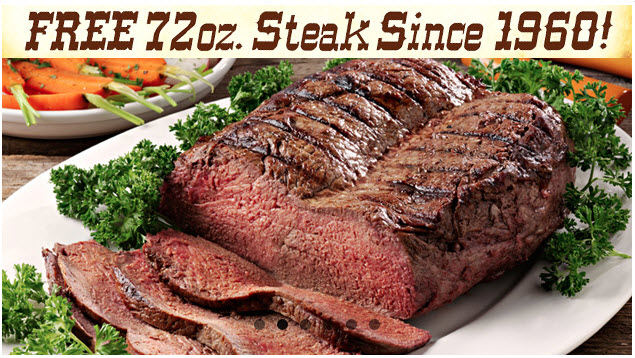 Thirty years ago, on July 23rd, 1983, I ate the 72 oz Steak at The Big Texan in Amarillo, Texas. There have only been about 4,800 people who have ever been able to do this feat and I thought I would use today’s blog to tell you my personal story about this. After all, us data visualization folks need to be good storytellers too.

I was living in College Station, Texas, home of Texas A&M University and working at the Texas Veterinary Medical Diagnostic Laboratory (TVMDL). By testing hundreds of specimens from around the world every business day, TVMDL contributes significantly to protecting the health of livestock, poultry, companion animals, exotic animals, racing animals, livestock show animals, and wildlife. TVMDL offers a wide range of state-of-the-art diagnostic tests that deliver accurate results promptly and affordably. Veterinarians, owners, industries and government agencies depend on our globally recognized expertise to help preserve animal and public health.

My boss at TVMDL, Dr. Craig Carter (“Doc” Carter) and I were in the process of migrating the automated TVMDL case tracking and reporting system to a Prime Computer using COBOL and a NASA-invented front-end GUI tool called REXCOM. We were also using new technology such as relational databases (in fact, Computerworld wrote an article about our use of relational databases). The TVMDL has its main lab next to the Texas A&M Veterinary School in College Station and also a remote site in Amarillo, Texas.

Dr. Carter and I were up in Amarillo to run the cables to all of the dumb terminals and talk some more to the Amarillo folks about the new system.

Every time I passed through Amarillo from Arizona to College Station, I always passed by The Big Texan, with their giant sign offering the 72 oz steak for free if you could eat it in one hour. I mentioned to the staff at the Amarillo lab that I wanted to try to eat it and they encouraged me to give it a shot. Dr. Carter even offered to pay the $32.00 cost of the steak if I lost, so I thought it would be fun.

First, let me tell you a little bit about The Big Texan and the 72 oz free steak contest.

The Story of The Big Texan

R. J. “Bob” Lee, a Midwesterner, whose family roots went back to the four-star Savoy Grill in Kansas City, grew up on stories and movies about cowboys, Indians, horses and Texas 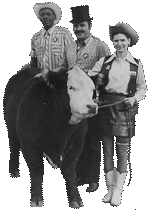 cattle ranches. The Texas mystique drew him like a lodestone. When he made his way to the Texas Panhandle and to Amarillo with his wife Mary Ann and their growing family, it didn’t take long for him to embrace the Lone Star State and to claim its persona as his own. His only disappointment was that he couldn’t find a first-class Texas-style steakhouse in an area of the country best known for cowboys and cattle.
In true Texas spirit, Bob decided to create a place that would satisfy the world’s hunger for good steaks and the ambiance of the Old West. He had no idea in those early days that he was destined to become a part of the Texas legends and lore that he loved. 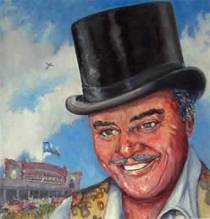 In 1960, R. J. “Bob” Lee opened The Big Texan Steak Ranch in Amarillo on Route 66, the “Mother Road.” Its distinctive architecture soon became recognized by travelers and migrating families whose roots spread all across America. The Mother Road was a good stopping place for great steaks grilled over an open flame.

The towering sign of a long-legged cowboy that Bob erected next to the building became a major landmark on Route 66.

The now World-famous FREE 72-oz. steak came to life not long after Bob opened the doors to the Big Texan Steak Ranch. 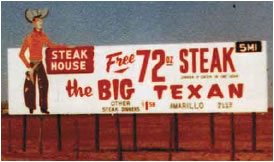 Beginning in the mid-1960s signs began cropping up along the Mother Road inviting travelers to come in for a 72-oz. steak dinner that was FREE if it could be eaten in one hour. Thousands of road-weary youngsters practiced their ciphering as they converted 72 ounces into four and one-half pounds. Those Big Texan signs became as much of the nation’s culture as the old Burma Shave signs. One company has long-since disappeared with the dust of the old road, but the other still flourishes. Big Texan Steak Ranch billboards can still be seen to the east and west of Amarillo along Interstate 40 and on major north-south routes that run through the Panhandle. 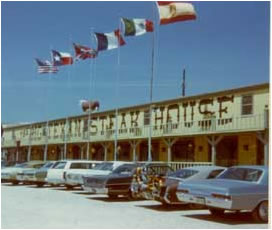 In the early 1970s, Interstate Highway 40 muscled its way across the country replacing Route 66 as the major traffic lane. Bob Lee purchased land along the route for the new highway.

He and his family built a new, bigger and better Big Texan Steak Ranch from the ground up along I-40.

The giant cowboy, now a historical icon, was moved by helicopter from its original location on the Mother Road to its current home on Interstate 40.

THE FIRE — Up from the ashes 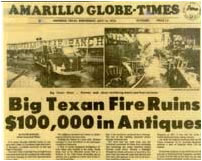 Excitement and prosperity turned briefly to despair in 1976 when a fire destroyed most of the restaurant. But the Lee family had learned through adversity and they remained undaunted and determined. Everyone — family members, employees, and friends — pitched in and the restaurant was only closed for one business day. The business continued to grow. 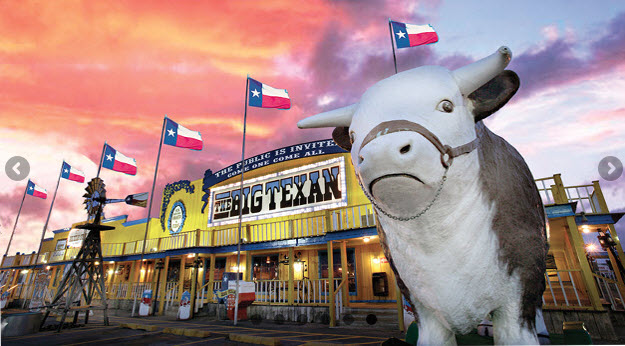 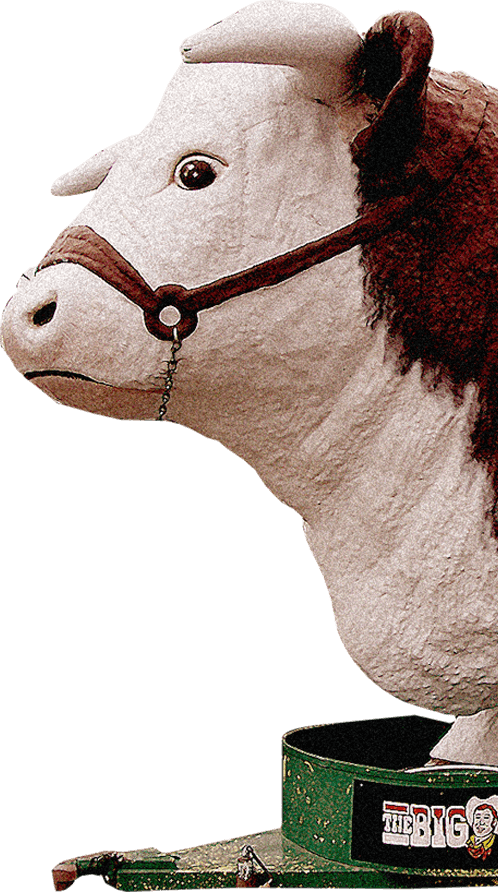 How the FREE 72 oz STEAK DINNER legend was BORN…

Many have tried. Many have failed.

Soon after the original Route 66 Big Texan open its doors in 1960, owner Bob (RJ) Lee was amazed at how many REAL Texas Cowboys, were coming in for his HUGE TEXAS SIZE STEAKS, that his menu offered. He also saw how much fun his out-of-town patrons & visitors were having watching these true Texans trying to “outdo” each other’s carnivorous appetites. Most of his Big Cowboys diners came from a near-by stockyard operation, & would stop in after a long days work. Friday’s was payday at the stockyard & he would cash their paychecks & offer 25 cent beer.

One Friday, he put several tables together in the center of the dining room & sat all the cowboys together & told them he wanted to see who could eat the most one pound steaks in an hour. The cost was $5 per eater & whoever ate the most got to keep the entire entry-fee.

The rules were simple; you could not get up during the contest or have anyone help you eat, you did not have to eat the fat & if you got sick, you were out.

The Cowboys put in their money took a seat & the contest was on, steaks were flying.

One of the eaters took the lead by swallowing two steaks in ten minutes. Next, he politely requested a salad & a shrimp cocktail be served with his third steak. He consumed the extras, then this soft-spoken giant called for his fourth steak & ask for a baked potato & a bread roll. He wasted little time on devouring those items & called for his fifth steak.

As the hour contest came to an end, this gastronomic superman had eaten: 4 & 1/2 pounds of steak, (which is 72 oz’s) baked potato, shrimp cocktail, salad and a bread roll.

In his amazement & delight of the crowd, Owner Bob (RJ) Lee stood up on a chair in the middle of the dining room to proclaim that: “from this day forward, anyone who could eat the entire 72 oz dinner-in one hour– gets it for FREE.”

On that date in 1962, the legendary 72 oz Steak Challenge was born & to this date, the contests stand strong.

The meal consists of Shrimp Cocktail, Baked Potato, Salad, with Roll, Butter, and of course the 72 oz. Steak

The Rest of My Story…

So, the next day, July 23rd, 1983, I ate very little during the day. Dr. Carter and I went to The Big Texan and ordered the 72 oz steak for me. He had to pay the $32.00 in advance and you only get your money back if you eat the steak and all of the side items. We ordered a pitcher of beer to help us along.

The steak came out and the server did some fanfare to announce I was attempting to eat the steak. The clock was set and off I went.

I ate the salad, shrimp cocktail, bread roll, baked potato and half of the steak in the first 30 minutes. Then something happened I was not anticipating.

First, as time passed, the steak was getting cold and the juices started to solidify. Second, my jaw was getting really tired and chewing became more difficult. I started cutting the remainder of the steak into 1 inch by 1-inch chunks. I starting chewing them, taking a swig of beer to quickly wash it down, but I was running out of time. I literally started putting a whole bunch of steak chunks in my mouth and pushing them down my throat with my finger and taking big swigs of beer. With two minutes left on the clock, I had finished the steak and joined a select group of crazy people who ate the whole thing.

I was awarded the certificate below (yes, they spelled my last name wrong) which to this day is proudly displayed on the wall in my kitchen nook. 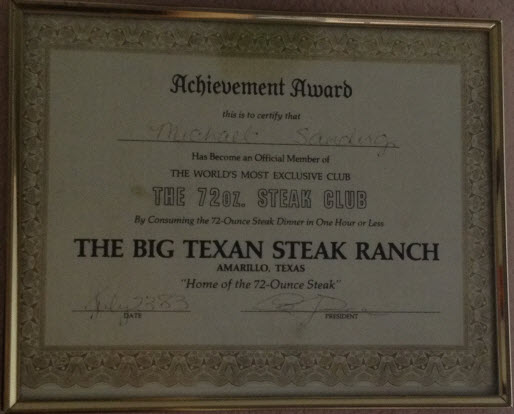 I also made it into The Big Texan Hall of Fame which I have shown a screenshot below. If you click on the link, you can download a PDF of the members of The Hall of Fame.

I have been thinking of heading over to Amarillo with my son, Dustin, to give it another try for old times sake. I have a new strategy in mind this time and Dustin would participate right alongside me. The hefty modern-day price tag of $72 makes me a little hesitant to try it though unless I am confident I can eat the whole thing.

I hope you enjoyed my little story and my own little claim to fame (small as it might be).

I’ll be back in a day or two with more exciting new blog posts about data visualization and how it has and still does affect the world we live in.

72 oz Steak at The Big Texan