WSJ DataViz: How Detroit is Different

A statue of sculptor Aguste Rodin’s ‘The Thinker’ is seen in front of the Detroit Institute of Arts museum along Woodward Avenue in Detroit, July 21, 2013.

Note: I just wanted to let you know I am going to occasionally post interesting graphics from The Wall Street Journal under the title “WSJ DataViz.” This week’s entry is about the sad affair that is going on in my hometown of Detroit. Crazy “solutions” are being tossed around like selling the art in the Detroit Institute of Art Museum to selling the Howdy Doody original puppet from its famous puppet collection. Greed and corruption brought it down. The great culture and heritage of this city should not suffer for these politicians sins. 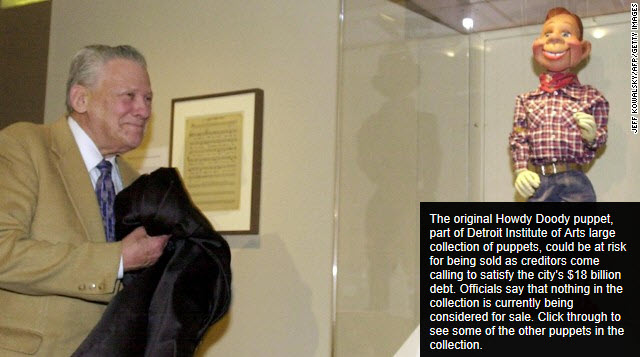 Politics Counts: How Detroit Is Different

Over the last few weeks, the city of Detroit has become America’s favorite urban cautionary tale. The largest U.S. city ever to go bankrupt has been called everything from a failure of self-government to a glimpse into the future for America’s cities.

But when you step back and look at the numbers, it becomes clear that Detroit is different. The mix of depopulation, economic shifts and racial problems that hit Detroit combined to create an unmatched set of trials – or at least unmatched for a city of its size and scale.

That’s not to say there aren’t lessons for others in Detroit’s troubles, there are. But trying to apply those lessons to other cities with questions like “Is Philadelphia next?” is likely a big mistake. The combination of troubles that led to Detroit’s bankruptcy, from auto industry declines to population loss, was in many ways woven into the city’s unique fabric.

Manufacturing, long the bread and butter of the Motor City, is a perfect example. Anyone with even a casual understanding of the U.S. economy knows that manufacturing has declined as a job creator over the past 60 years, but Census data from then and now show the numbers in the city of Detroit are truly breathtaking.

That is a 92% drop in the number of people employed in what was the primary industry in Detroit since 1950. Yes it happened over time, but it was an enormous blow to a city that was built on automobile production – even as the declines happened.

Other big cities have seen manufacturing declines but not to the same extent. Chicago’s manufacturing jobs went from 593,000 in 1950 to about 121,000 today, according to Census figures. But Chicago was never built just around manufacturing the way Detroit was and while Chicago’s losses were steep – an 80% decline since 1950 – they were not nearly as bad as Detroit’s.

As the manufacturing jobs left Detroit – many into the suburbs – the city’s population began to change. Detroit’s white population peaked around 1951, but the decline accelerated following the race riots of the late 1960s. In 1950, Detroit was 84% white, by 1980 it was 34% white. Today it is about 11%.

Other big cities saw their white population drop, but nowhere near those numbers. Philadelphia is still 45% white. New York is 44% white.

The racial changes in the city of Detroit not only raised racial tensions between the city and suburbs – making it difficult for the region to work together – the loss of the generally wealthier white population had a very real impact on the city’s tax base. Median household income is now less than half what it was in 1970, according to Census figures adjusted to 2010 dollars.

Detroit’s white flight – the city’s white population went from 1.5 million in 1950 to about 76,000 today – was also a big part of the general flight from the city. And the city’s much-discussed depopulation, from 1.8 million to about 700,000 today, has left it with two very real seemingly intractable problems.

First, density. The city may only be 700,000 people today, but it is still 138 square miles. Detroit, which was never very dense to begin with, is now far less dense than it’s kindred big cities of the 1950s – New York, Los Angeles, Chicago and Philadelphia. And that matters a lot when it comes to delivering city services like plowing roads and picking up garbage.

Second, fewer people means fewer city workers, and ultimately fewer people paying into the city’s municipal pension fund. Of the five biggest cities from 1950 – New York, Los Angeles, Chicago, Philadelphia and Detroit – only Detroit has fewer municipal employees than it did in 1950.

In some ways that’s a good thing – or at least a necessary one. But that smaller government that serves 700,000 people, still has the pension obligations for the government designed to serve a much larger city. Detroit’s massive pension debt played a large role in the city’s bankruptcy.

None of this is to suggest Detroit’s leaders don’t bear some responsibility. Mayors from Coleman Young to Kwame Kilpatrick did little to right the city once its problems were apparent. And corruption has certainly played a role; Mr. Kilpatrick is now awaiting sentencing on corruption charges.

Furthermore, the Motor City highlights the dangers of building one’s economy around a single industry – particularly one where automation and cheap labor are constant challenges.

But Detroit’s problems are deeply rooted in the way the city developed and, in many senses, they are unique to its circumstances and history. It’s future will be challenging and may set precedents for issues like municipal pensions. But in a broader sense, don’t expect it to be instructive.