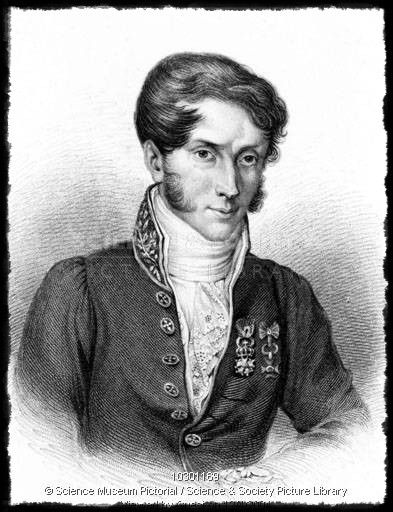 Charles Joseph Minard, born on March 27, 1781 in Dijon, France, is most widely known for a single work, his poignant flow-map depiction of the fate of Napoleon’s Grand Army in the disastrous 1812 Russian campaign. This “Carte figurative des pertes successives en hommes de l’Armee Francais dans la campagne de Russe 1812-1813″ has been called “the best graphic ever produced” by Edward Tufte, one which seemed to “defy the pen of the historian by its brutal eloquence.” [SOURCE]

More generally, Minard was a true pioneer in thematic cartography and in statistical graphics, and developed many novel graphics forms to depict data, always with the goal to let the data speak to the eyes. The definitive biography of Minard and his contributions to thematic cartography by Robinson begins, “When the complete story of the development of thematic cartography is finally added to the history of cartography, the name of Charles Joseph Minard (1781-1870) will again take on some of the lustre it had during the later part of his lifetime. The fifty-one cartes figuratives that came from his fertile mind and adept hand show a combination of cartographic ingenuity and concern with the graphic portrayal of statistical data that was almost unique during the central portion of the century.”

The present sketch of his career and contributions to statistical graphics also draws on: (a) the necrology by Minard’s son-in-law Chevallier, (b) Palsky’s seminal overview of quantitative graphics and thematic cartography in the 19th century, (c) an analysis of his contributions to statistical graphics from a modern perspective, and (d) a complete online catalog of all of his graphic works.

Charles Joseph Minard was the son of an official of the constabulary and comptroller of the local college in Dijon. At age 15 he was accepted in science and mathematics at the renown Ecole Polytechnique in Paris (1796-1800); among his professors Fourier and Legendre made a strong impression. In 1800, he transferred to the Ecole Nationale des Ponts et Chausees (ENPC), the premier training school for engineers responsible for building ports, roads, canals, and later railroads in France. He remained with the ENPC for his entire professional career (1803-1851), first as a field engineer, later as an instructor on “interior navigation” and railroad construction. In 1830, Minard was appointed a superintendent, then divisional inspector (1839), and finally Inspector General of the ENPC (1846) at age 65. Even after mandatory retirement on his 70 birthday in 1851, Minard continued his role on the advisory board of the ENPC journal, Annales des ponts et chausees. More importantly, his development of new graphic forms and themes nearly doubled in rate for 10 years, and continued up to his death at age 90.

Minard’s first career was as a practical engineer; but even here he showed a  flair for novel visual explanation and portrayal. His report on the collapse of a bridge on the Rhone includes a superposed before-after drawing that shows directly to the eyes that the bridge collapsed because the supports collapsed on the inflow side of the river.

Minard’s second career, as a visual engineer and developer of new forms of statistical graphics and thematic cartography begins in 1844, with his first tableaux graphiques. These attempt to show the differential costs for transport of goods and people, for the entire route of a line vs. the parcours partial of rates for intermediate travel. To show this in a “graphic table”. Minard invented a new form of the divided bar chart, where the widths of bars were scaled to distance along the route, and the heights of sub-divisions of the bars were scaled to proportions of passengers or kinds of goods. Consequently, the area of each rectangle would be strictly proportional to the cost or price of transport, in pounds or people-kilometers. These graphic tables were important early progenitors of modern mosaic displays.

Quite shortly, Minard realized that geographically-based quantitative information could better be shown on a map, as bands of width strictly proportional to those quantities, so that again, area equals length times width would convey total numbers or amounts. From a first crude flow-map of passenger travel from Dijon to Mulhouse, Minard would proceed to develop this graphic representation of  flow-over-space into a near art form, always allowing the precise portrayal of statistical data precedence over the confines of the space. His graphic catalog contains numerous instances. Perhaps the most dramatic are a pair of flow-maps showing the trade in cotton in Europe in 1856, and again in 1862, after the outbreak of the American Civil War. Just a glance makes clear that blockade on exports of raw cotton from the US South stimulated this trade with India. 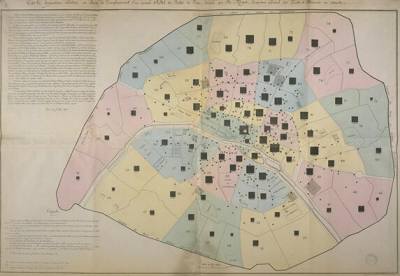 Map showing the need for a new post office 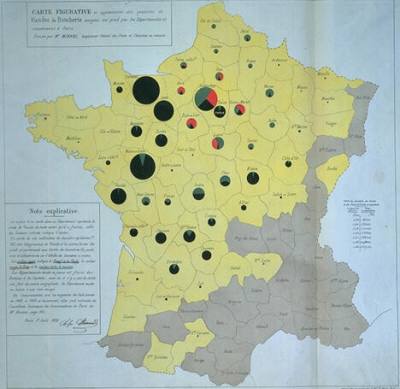 Proportions of meat sold in Paris 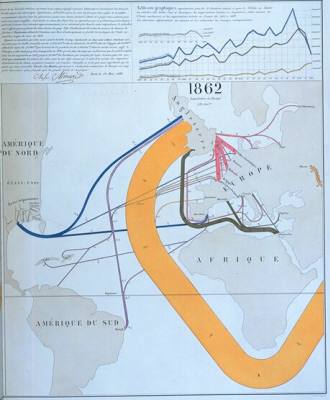 Qualities of cotton in imported wools

Throughout his later years, and especially after his retirement, Minard continued to study new topics and to invent new graphic forms. He was the first to use pie charts on a map, where he extended Playfair’s use of them (NOTE: more on Mr. Playfair in another blog) to show both the relative proportions (of meats sold in Paris: beef, veal, or mutton) by angular slices, and the total amount of meats by the area of each pie. In 1865, the city of Paris needed to build a new central post office. Minard’s solution was a map showing the population of each arrondisement by squares with area proportional to population, so that the ideal location was their visual and geometric center of gravity.

Minard’s influence and contribution to visually-based planning was such that, from about 1850-1860, all Ministers of Public Works in France had their portraits painted with one of Minard’s creations in the background. At the 1857 Vienna meeting of the International Statistical Congress, the “methode a la carte graphique du chemin de fer francaise” (an apparent reference to to Minard) was recognized favorably in the debate on standardization and classification of graphical methods. In 1861, some of Minard’s works were presented to Napoleon III (a singular honor for an engineer of middle-class background), who received them with enthusiasm.

Minard’s most famous work, his depiction of Napoleon’s Russian campaign, deserves special mention in this brief biography, in part because it is the only known graphic portrayal of a national defeat, in France, or elsewhere. Chevallier makes the reasons clear: As a young engineer in Anvers in 1813, he witnessed the horrors of war in the siege by the Prussian army. In his final year, he sensed the renewal of the Franco-Prussian war and, though frail and infirm, fled to Bordeaux with his family. Among his last works, he drew a pair of flow-maps together: the famous one of Napoleon’s Russian campaign, and another of Hannibal’s retreat from Spain through the Alps to Italy, again with great loss of life. “The graphical representation is gripping; … it inspires bitter reflections on the human cost of the thirst for military glory.” It may well be, for this reason, that Minard’s most famous graphic defied the pen of the historian.

Next: Napoleon and the events leading up to The Russian Campaign of 1812