The Broad Street Pump had a long reputation of being a reliable source of clean well water. It extended 25 feet below the surface of the street, passing the layers of accumulated rubbish and debris that artificially elevated most of London. It stretched through a bed of gravel all the way to Hyde Park, down to the veins of sand and clay saturated with groundwater.

Many of the residents in Soho would pass by the water pumps closer to their homes, such as the one on Rupert Street and another on Little Marlborough, to get the much better tasting water of the Broad Street pump. The water was colder and had a pleasant hint of carbonatation. The coffee houses uses this water as well as the pubs in the area diluted their spirits with it. The Eley family who made the percussion caps would take jugs from their home, and make the trek to the Broad Street pump to get water for their mother. They also maintained two large tubs of this water for their employees to  have a drink to quench their thirst during the workday.

We would later learn more about the water drinking habits of the neighborhood and, more specifically, the water from this pump. 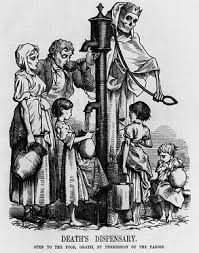 On Wednesday, Mr. G the Tailor who lived at 40 Broad Street, began to feel queasy and had an upset stomach. The symptoms would have been painful. He would have vomited all night. He would have had muscle spasms and abdominal pain. He was terribly thirsty. His bowels were evacuating large quantities of water with white particles that clinicians of the day called “rice-water stool.”

Sadly, the one thing that cholera did not affect was the mind. Mr. G was very much mentally alert and aware of his situation. One stated,

“While the mechanism of life is suddenly arrested, the body emptied by a few rapid gushes of its serum, and reduced to a damp, dead…mass, the mind within remains untouched and clear,shining strangely through the glazed eyes, with light unquenched and vivid,-a spirit, looking out to terror from a corpse.”

On Friday, Mr. G barely had a pulse, his eyes were sunk, his lips dark blue, as well as the skin of his lower extremities.

As baby Lewis suffered in the next room, Mr. G’s heart stopped beating, barely 24 hours after showing the first symptoms of cholera.

Within another few hours, another dozen Soho residents would also be dead.