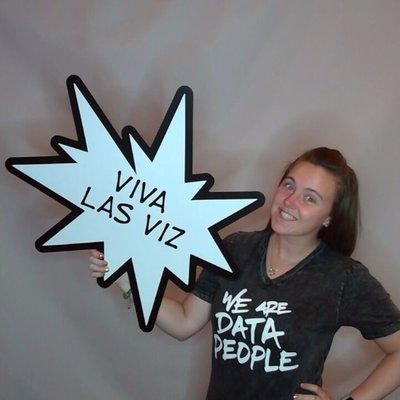 Lorna started her data viz journey as part of The Information Lab’s Data School, a 2-year program being taught Tableau and Alteryx by the best of the best. Previously, she studied a BSc and MSc in Sports Science, alongside a placement with British Gymnastics, which is where she learned to use Tableau and she knew that’s what she wanted to do.

Lorna has presented at many Tableau User Groups, and helps co-ordinate the NorthWest UK TUG. She is the reigning Tips Champion of the London TUG and competed on Stage at Vegas against Zen Master Ann Jackson. Through this, Ann and her will be doing a bigger battle at TC18.

Lorna is a 2nd Degree BlackBelt in Taekwondo, where she used to compete at National, International and World level. She was once a world champion. Lorna is hoping to achieve her 3rd Degree in the not so distant future. She is also a massive Rugby League fan.

Lorna loves Vizzing and Alteryxing. She also recently just become a Tableau Public Ambassador, which she is extremely happy about.

Michael: In your biography, you mentioned you recently graduated from The Data School with The Information Lab. Can you tell us a little about what the curriculum is in The Data School, the kinds of projects you had to do, and how it helped your career?

Lorna: When I found The Data School, I had been using Tableau for a couple of months as a Sports Analyst, I had seen the real world implications of people being able to see and understand their data a lot easier. I wanted to continue this. When I joined the Data School, I didn’t really know what to expect. The curriculum in The Data School varied from week to week. Throughout the four months, we were taught by some of the best of the best when it comes to Tableau and Alteryx. So some weeks was majority Tableau, then others were majority Alteryx. During these teaching weeks, we also had a client projects. Typically, we would have three-fourths of the day being taught something, then the rest of the day working on the client project. The projects varied depending on the clients needs and desires. After graduating the data school we had 3 x 6 month placements, where we got to put our skills to practice. Clients varied in industries. Being a part of The Data School has been an amazing experience and I would recommend it to anybody. It has helped me and my career in ways I would never of imagined. I would never of imagined being a Tableau Ambassador 2 years ago. And I am extremely proud of the journey I am on.

Michael: I really like your data visualization you created for the Big Life Foundation. Can you tell us more on how you became involved in this project? Also, can you tell us the process you followed to create this dataviz?

I wanted the images to take focus, which was closely followed by a chart or some key numbers. I split the viz into sections. The first section was about the foundation and how much they do. The next section was solely about Elephants, which then lead on nicely to other animals. Each bit of data was within the annual reports provided by Big Life Foundation. I wanted to finish the viz with a call to action which allows people who see my viz to donate if they want to help.

Michael: I also really liked your Facts About Suicide data visualization. After researching and creating this dataviz, what can we do better in determining and helping our family and friends who may be suicidal?

Lorna: Thank you, this viz topic has recently become very close to my heart. I think anyone can help anyone. Being made aware of the different circumstances and making sure people know it is OK to talk. I would love to be able to say I have helped someone. Making sure your friends know that you are there for them to talk to and listen, and maybe check in on those loved ones you haven’t spoken to in a while just to make sure they are ok. I don’t think we will ever be able to determine whether someone is suicidal or not, look at Robin Williams for example, from the outside he was the happiest man, making people laugh and being funny. As he quotes –

I know I will be checking in on people and making sure they know I am there to talk to.

Michael: Can you tell us three of your favorite Tableau tips and tricks?

Michael: Also, can you tell us three of your favorite Alteryx tips and tricks?

Michael: Ann Jackson and you are going to present the Tableau Tips presentation this year at TC18 in New Orleans? Can you tell us about what to expect and how Ann and you are preparing for your presentation?

Lorna: We are yes. We are going to push ourselves and aim for 100 tips in 50 minutes. You can expect to see extremely quick fire Tableau Tips. We are preparing by having Skype calls to see how we are both getting on, we are messaging each other most days. We now just need to put everything together and make it all fit in the time period.

Sarah Bartlett and I are also doing a talk at TC18 New Orleans. A – Z of the Tableau community. It is one not to be missed if you are an active or new member of the Tableau Community.

Michael: With Tableau releasing Tableau Prep, can you tell us why Alteryx is still relevant?

Lorna: I think Tableau Prep is very much in its early days at the minute. Tableau Prep can do a lot of the simple stuff that Alteryx can do. But there are still many things it can’t do. For example, Spatial and Predictive analytics. Also a big part would be scheduling, I wouldn’t be able to schedule a prep workflow. Personally, I am a big fan of the download tool in Alteryx, so if Prep releases a similar tool then I would be even more interested.

Michael: What is missing from Tableau Desktop (don’t include anything that is going to be released with v2018.2) and why do we need it?

Lorna: My ‘To Do’ list is getting longer and longer. There is so much I want to do but not enough time to do it. I will always try and enter every Iron Viz feeder competition. I also have an ongoing project with Corey Jones, about National Days. We aim to find one a month (for now), find some data and then viz about it. Our last one was about blood donors and our next one is coming soon. I will be an active member of the Tableau Community, especially after becoming a Tableau Ambassador. I will be vizzing, and if you think I haven’t vizzed in a while- reach out to me and bug me a little, I don’t bite.